YOUR HOLIDAYS IN MARINA DI GIOIOSA

The coastal town of Marina di Gioiosa Ionica, town of about 6,500 inhabitants in the heart of the Riviera dei Gelsomini along the Ionian coast of Reggio Calabria, is a summer tourist destination very appreciated and frequented for its crystal clear sea and for the wide sandy beach, in summer well equipped with lidos with all the services.
Marina di Gioiosa was “Blue Flag” from 1999 to 2004 and again from 2008 to 2012 thanks to its pristine and clean sea, as it’s also demonstrated by the presence, in its sea beds, of the seahorses! With both species present in Italy (Hippocampus hippocampus and Hippocampus guttulatus), these timid, oddly shaped little fishes swim undisturbed in the Gioiosa’s seabed in low depth. They are a biological indicator, because the seahorse does not live if there are pollutants, thus certifying the health of our sea water!
The City of Marina di Gioiosa was born as a fraction along the coast of the medieval town of Gioiosa Jonica (at less than 5 km), from which it split in 1948, and offers visitors a variety of cultural and entertainment alternatives!
In the heart of the village, hidden among modern houses, there are the remains of a small theater of Roman time, dating back to the III-IV century A.D. Located in a flat area, it was likely able to accommodate 1.200 spectators and is characterized by a peculiar structure of concentric walls for the seating arrangement. The building is used in summer time for musical and theatrical performances.
A short distance from the theater, beyond the railway, there’s a watchtower dating back to 1565, built against the Saracens raids, called Spina Tower or Torre del Cavallaro, well preserved and easily accessible from the waterfront.
In the country area around the town, a few kilometers from the coast, there’s another interesting medieval building, the so-called Galea Tower, a well-preserved tower-house dating from the fifteenth century. 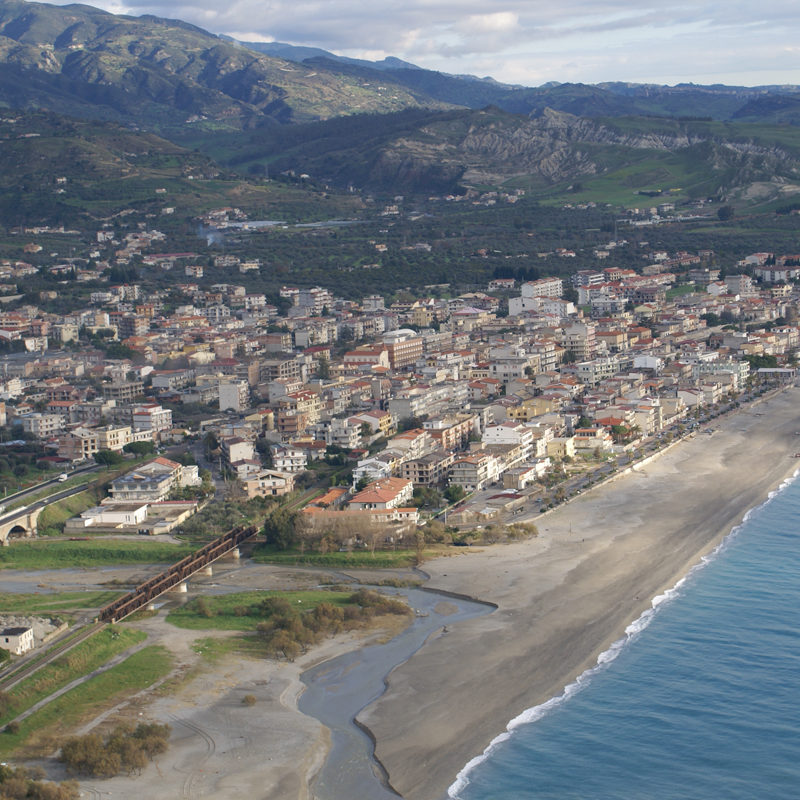 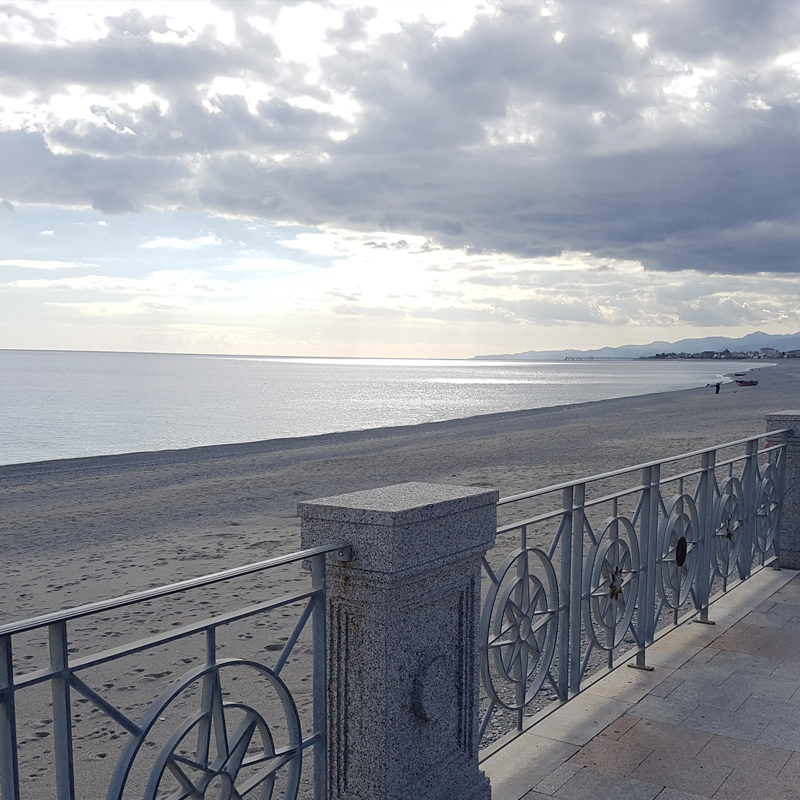 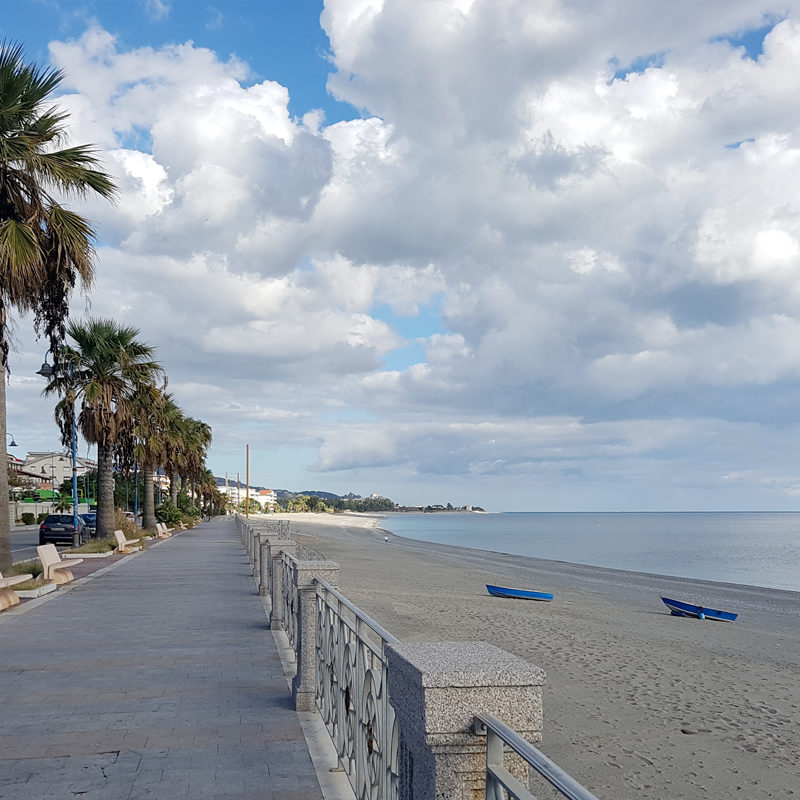 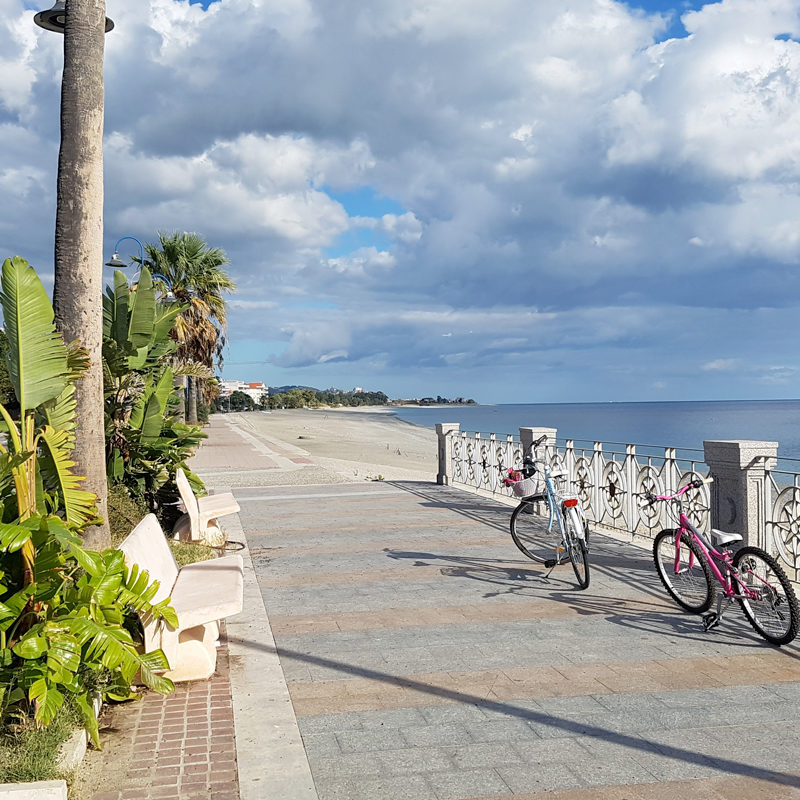 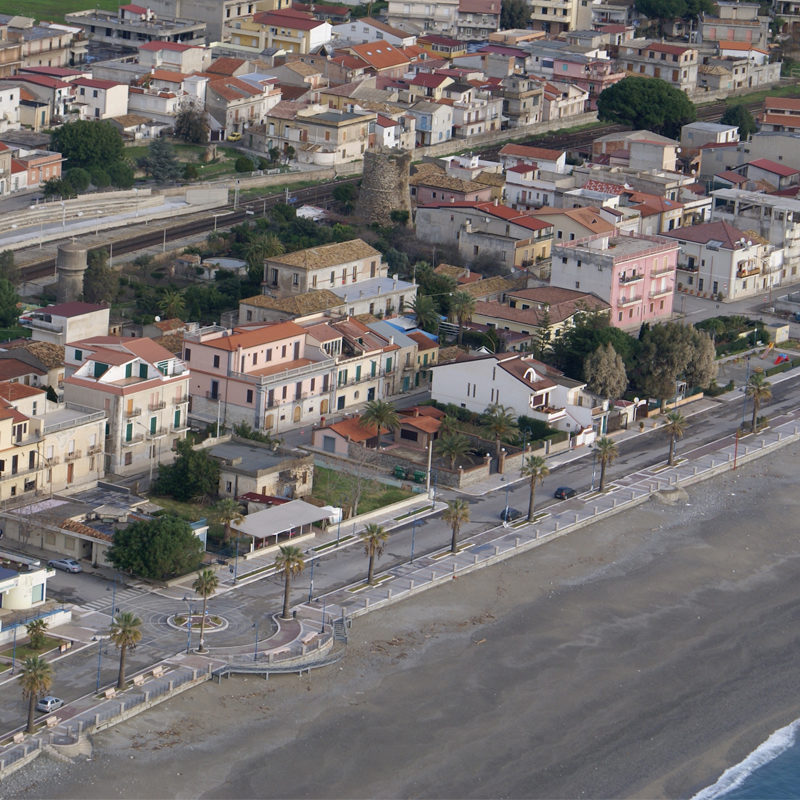 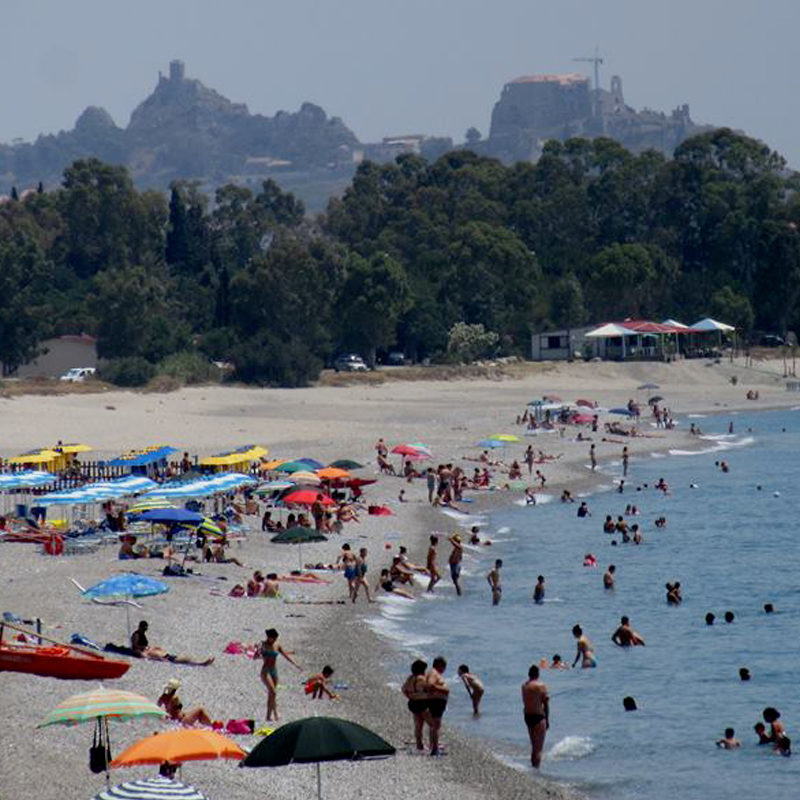 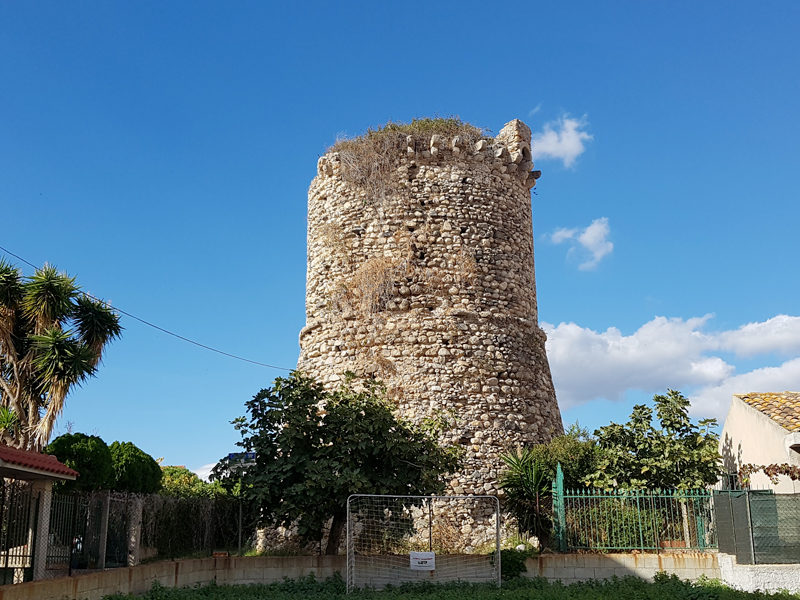 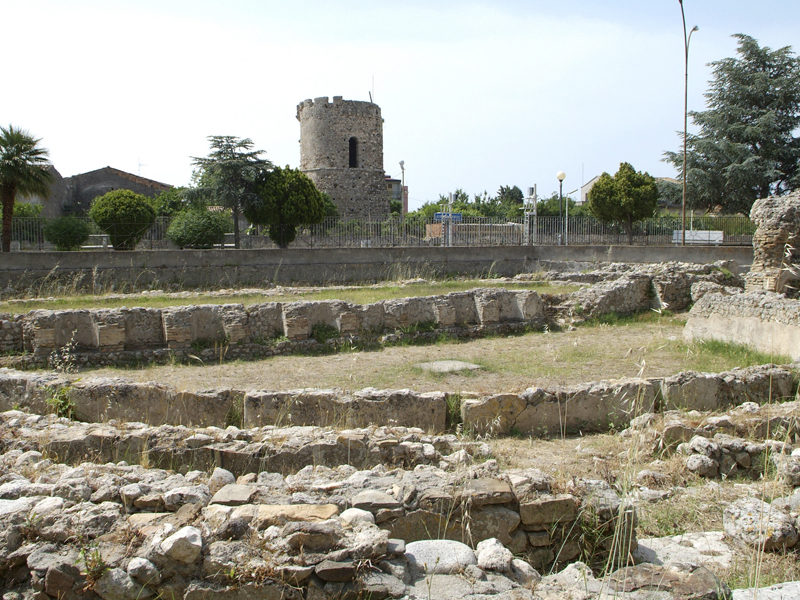 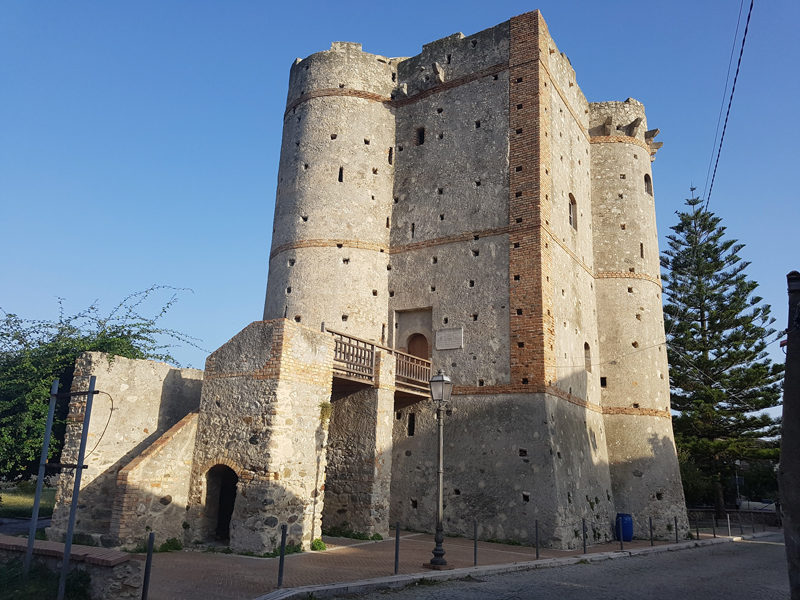 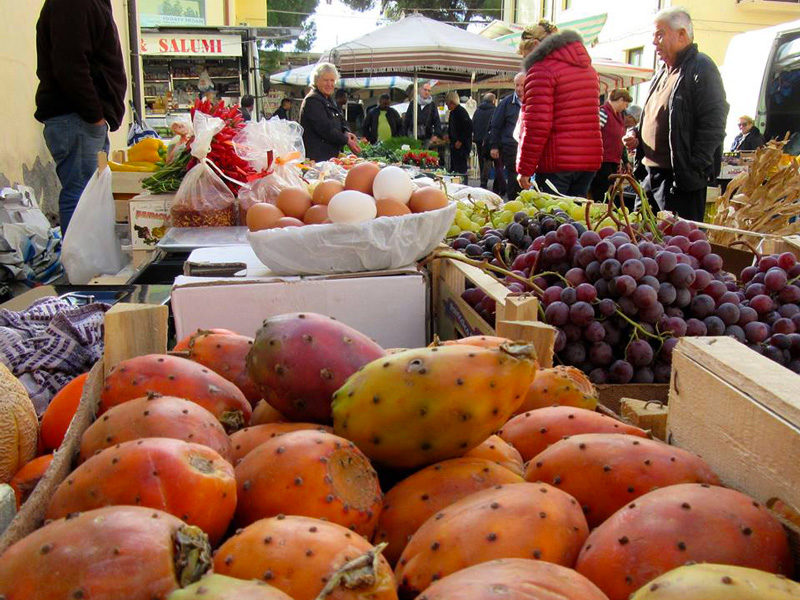 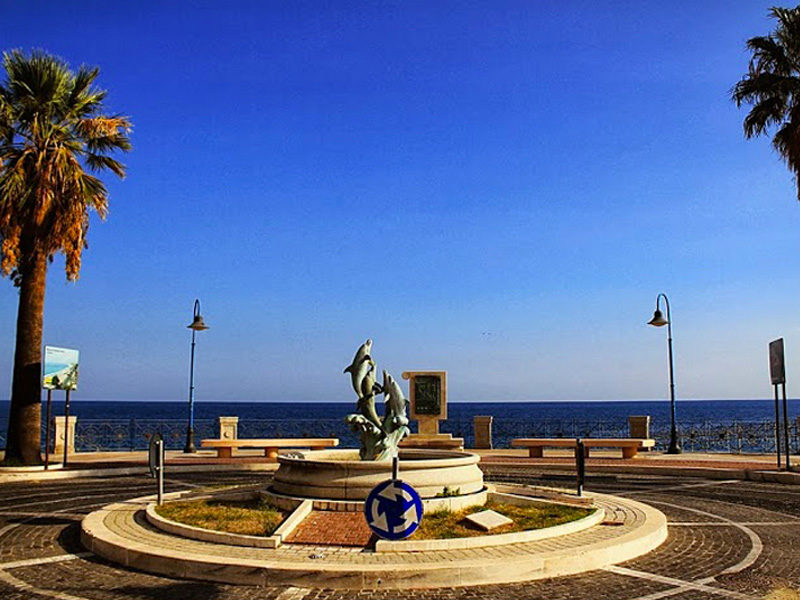 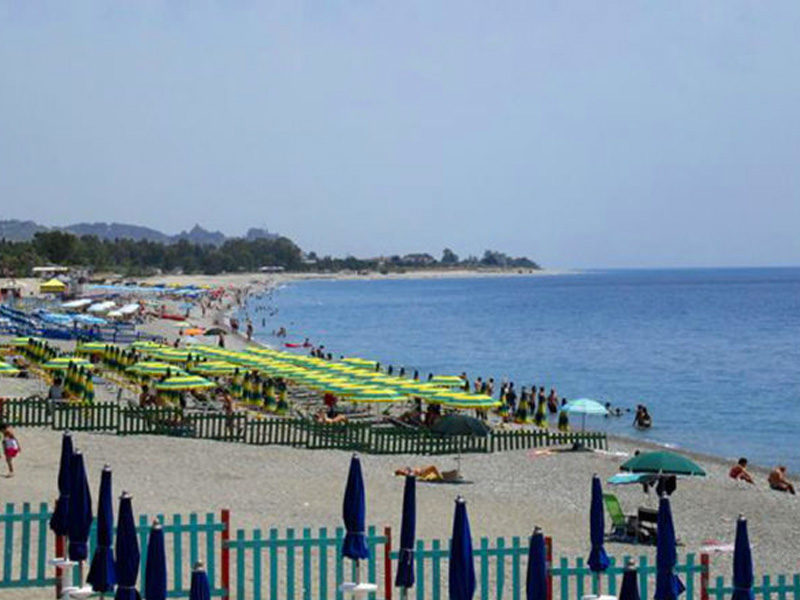 Do not miss a visit to the medieval village of Gioiosa Jonica, dominated by the ruins of the castle of the second half of the thirteenth century. The center is characterized by the presence of numerous noble palaces, with beautiful portals, including Amaduri Palace, set up with a Picture Gallery and a Museum of Wood.
Just outside the historic center is the Roman Villa called “Naniglio”, dating back to the V sec. A.D. and characterized by the presence of a large underground cistern with three naves and by several residential floors decorated with patterned polychrome mosaics.

Just a 15 minute drive, you can reach Mammola, one of the Gate of the Aspromonte National Park. The village retains the typical medieval urban layout, with narrow alleys and stairways. The town is home to the Park Museum MuSaBa (= MUseum SAnta BArbara), an open-air park-laboratory of contemporary art, where you can meet the local artist Nick Spatari. Mammola is also famous for the presence of many restaurants serving cuisine based on “stocco”, ie stockfish, here become an identity food! Come here for tasting it and to find out why…

A 30 minute drive, you can reach Gerace, another Entrance to the Aspromonte National Park, the pride of Calabria, recognized as one of the most beautiful medieval villages of Italy, awarded with the Orange Flag of the Touring Club in 2015. On the rocky crag, at almost 500 m above sea level, you’ll enjoy breathtaking views of the whole Riviera dei Gelsomini (ie Jasmines Coast) and, starting from the ruins of the Norman Castle, you will visit a place where time seems to stand still… Do not miss the imposing Norman Cathedral of the XI sec., the Church of St. Francis, with the altarpiece in marble inlays, and the Sun Gate, with its breathtaking view of the coast and of the village below

Driving 8 km south of Gioiosa along the coast, you will reach Locri, which houses the National Museum and the Archaeological Park of Locri Epizephirii, which was an important Magna Graecia city. In the archaeological park you can visit the remains of the sanctuary of Demeter, the boundary city walls, the Marasà temple, the Roman baths inside the Casino Macrì. The Museum, small but well set up, preserves important archaeological finds from the seventh century B.C. until the V-VI sec. d.C .: over 1.200 years of history!

Going a little further South, 30 km from Marina di Gioiosa, you will reach the Roman Villa in Contrada Palazzi at Casignana, a real gem of archeology in Calabria! In a well set up Archaeological Park, you can admire the remains of a Roman villa dating back to the I-V sec. A.D., which houses one of the largest and well-preserved complex of polychrome mosaic floors of the South of Italy!

Leaving from Marina di Gioiosa along the coast towards North (6 km approx), the first town you’ll meet will be Roccella Jonica, another popular seaside resort on the Ionian coast, very lively, famous for its Festival Jazz and dominated by the fortress near the sea, on which stands the castle of the noble family Carafa. At Roccella there is a lovely little port, an important stopover site along the routes of the low Ionian sea.

Going further to North along the Ionian coastal road SS106 – passing through Riace, site of the discovery of the famous greek statues of the Bronzes of Riace – about 25 km from Marina di Gioiosa, you will reach Monasterace Marina, where there are the remains of the ancient Greek town of Kaulon. Here you can visit a nice small Museum, with exhibits coming also from the sea bed, and the wide Archaeological Site, still under excavation.

Going to the hinterland for 8 km from Monasterace, driving along the valley of Stilaro, you will reach Stilo, charming medieval village built at the foot of Mount Consolino. Besides the visit of the old town, you cannot miss a stop at the “Cattolica”, a small Byzantine church, a building really well preserved, dating back to the X sec. A.D., with remnants of the original frescoes: one of the emblems of the entire district of the Jasmines Coast!

Continuing along the SS106 up to Caulonia and taking the fork to Focà, you will reach the fraction of Santa Domenica at Placanica, where is the Sanctuary of Our Lady “dello Scoglio” (ie of the Rock), a destination for a large influx of pilgrims from all over Italy. This is the place of the apparitions at Brother Cosimo, in a natural site with an extraordinary evocative power, in an inaccessible valley, that the Virgin said – according to the account of Brother Cosimo – she wants to turn into a “great spiritual center, where souls could find peace and rest “.”.

For lovers of nature and of the sweeping views, there are numerous trails within the Aspromonte National Park, easily reachable starting from Marina di Gioiosa.
One of the most beautiful trails is located in the municipality of Ciminà, on the summit of the Mount Tre Pizzi, characterized by three imposing rocky peaks that rise into the sky. After an hour of walking, you can enjoy a magnificent 360 ° view on the Ionian coast and on the high peaks of the Aspromonte.
The excursion cannot be complete without a stop in the small town of Ciminà, to taste cold cuts and “caciocavallo”, a typical local cheese, recognized as a Slow Food Presidium.

Only 10 km away from Marina di Gioiosa, in the municipality of San Giovanni di Gerace, there is a very beautiful nature trail, known as the “Scialata”. It winds along the stream Levadio, immersed in a green paradise of lush vegetation, equipped with wooden bridges and characterized by several water features with cascades, waterfalls and small canyons. The path ends in a pic-nic area, equipped with tables, with a natural spring.

But don’t forget, this is just a quick rundown of some of the sites close to Marina di Gioiosa Ionica!
In an hour or one hour and half drive to the maximum, you can reach the opposite Tyrrhenian coast, with its high cliffs headlong the sea, or the highest peak of the Aspromonte (Montalto, 1.956 m above sea level) with a wide panoramic view of 360°, or finally our provincial capital Reggio Calabria, with its waterfront opened on the Strait of Messina, described by Gabriele d’Annunzio as “the most beautiful kilometer in Italy”. Here you cannot miss a visit to MArRC, the National Archaeological Museum of Reggio Calabria, home to the famous Bronzes of Riace, bronze masterpieces of the Greek art of the fifth century B.C.